How to make the CocoRum Punch 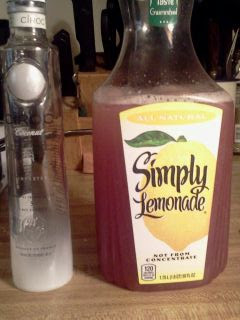 So, on Sunday..it was Father's Day. Next door, there is a Guyanese family. It's tradition on holidays to make a Rum Punch. If you don't know what a Rum Punch is...think of a less crazy juice and soda infested drink with Rum. Usually with a rum punch, a lot of natural ingredients are used like Tamarind, Lime Juice, Lemon Juice, Simply Syrup, Rum, Pineapple Juice, etc. This one is a bit different...why? Well, I'll tell you.

First of all, I had Guyanese Rum, which is one of the best rums in the world *just sayin*. Then the Tamarind and the other juices (which I don't know because it's their family recipe). It was kinda strong as it should be....I had lemonade frozen over for a while..so I decided to put that over top of it. I also had a small bottle of Ciroc so I put that over top of it...Today, I put in 200 ML of Ciroc and topped it off with a little Ginger Ale to give it that nice kick, you know? It tastes great and it's definitely an appealing color for the ladies. As you can see from the photo above, it looks pretty serious. LOL.

At any rate, what kind of Rum Punches or Jungle Juice mixes, do you like? Here's one of my favorite videos from Chesterfield Browne! He makes two special rum punches using Mount Gay (Bajan) Rum.